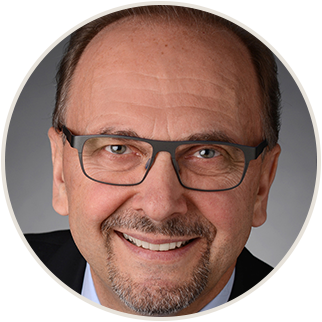 Dr. Da­niel Bu­ser is Pro­fes­sor and Chairman at the De­part­ment of Oral Sur­ge­ry at the Uni­ver­si­ty of Ber­n in Swit­zer­land since 2000. Among other Swiss Societes, he served as President the EAO (1996/97), and of ITI (2009-13), the world’s largest association in the field of implant dentistry.

He re­cei­ved several scientific awards by professional organizations such as the ITI, the AO, the AAP and the AAOMS. Recently, he was honored with an Honorary Professorship by the University of Buenos Aires (2011), the Brånemark Osseointegration Award by the Osseointegration Foundation in the USA (2013), an Honorary Doctorate by the University of Szeged in Hungary (2014), and the Jerome and Dorothy Schweitzer Research Award by the Greater New York Academy of Prosthodontics (GNYAP) in New York (2015).

His main research areas are in surface technology, long-term stability of dental implants, tissue regeneration around dental implants, and Gui­ded Bo­ne Re­ge­ne­ra­tion. He has authored and co-authored more than 350 publications, which are highly cited, and several text books including two GBR books and several ITI Treatment Guides. He widely lectures at national and international conferences.

Implant Placement post Extraction in the Esthetic Zone:
When im-mediate, when early, when late?
WED 01.02 | 09:20

The timing of implant placement post extraction in the esthetic zone is a critical decision, since it influences the preditability of esthetic outcomes. The treatment options have been defined by the ITI in 2004 with immedioate, early and late implant placement. These options are presented in light oft he post extraction ridge and soft tissue alterations, which are much understood these days. The various treatment options are presented with their indications and typical case reports.

Immediate Implant Placement is only used in ideal anatomic sites with a thick facial bone wall (> 1mm) and a thick gingival biotype. Then, flapless implant placement is preferred with an internal grafting of the gap between the implant surface and facial bone wall. A correct 3D position oft he implant is tricky. Thus, this approach is surgically demanding and rarely feasible due to anatomic limitations (5-10%).

Early Implant Placement is most often used (>80%), when the facial bone wall is thin or lacking. Then, a healing period post extraction of 4 to 8 weeks is applied allowing for a spontaneous soft tissue thickening, and implant placement is done with an open flap procedure. It’s combined with a simultaneous Contour Augmentation using autograft chips and DBBM, combined with a collagen membrane. This technique is well documented with excellent results up to 10 years.

Late Implant Placement is very rarely necessary (<2%), for patient or site specific reasons. If indicated, extraction is combined with socket grafting to limit the extent of local atrophy using this ridge preservation technique.

The utilization of dental implants in the esthetic zone is a challenge for involved clinicians. With the increasing application of dental implants by unexperienced colleagues, the occurrence of esthetic failures with implant supported restorations is raising. This lecture will address the causes for such esthetic failures and the surgical approach for therapy. In most cases, implant removal is necessary, which must be done with a low-trauma technique to avoid additional bone loss. Today, this is done with special implant removal instruments usinf reverse torque technique (RTT). In addition, these failures are often characterized by a lack of keratinized mucosa.

The current strategies for the reestabilshment of keratinized mucosa and for the augmentation of missing bone, mainly on the facial aspects are presented and documented with case reports. This includes aspects of timing, sugical techniques, and the selection of appropriate biomaterials.